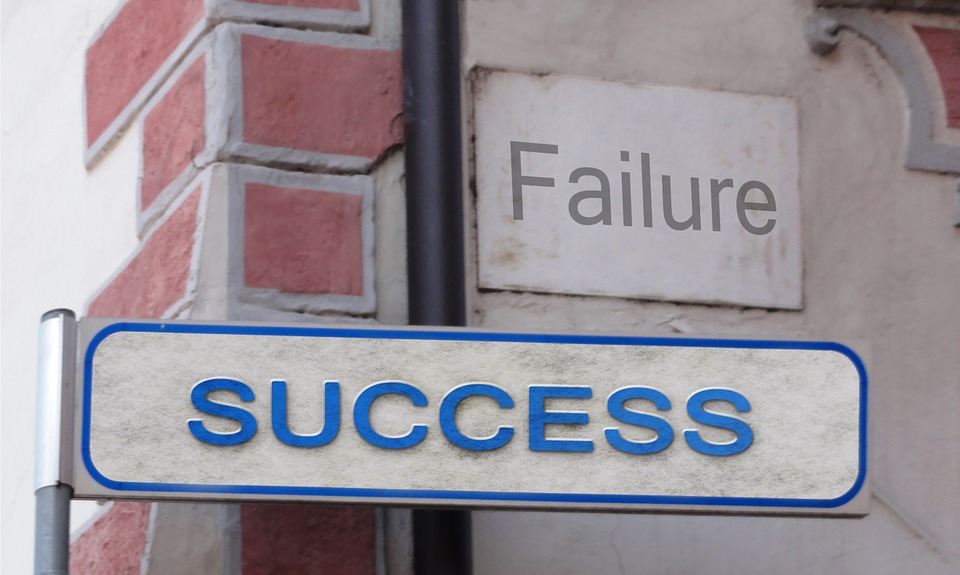 Let’s face it.  We all make mistakes.

Most of us know that failure is a reality of life, and at some level, we understand that it actually helps us grow. Intellectually, we even acknowledge that the greatest achievers — past and present — also routinely experienced colossal failures.

But still, we hate to fail.  We fear it, we dread it, and when it does happen, we hold onto it.  We give it power over our emotions, and sometimes we allow it to dictate our way forward (or backward). Some of us go to great lengths to avoid failure because of all the pain and shame associated with it.

Why is it so hard to let go, forgive ourselves and move on?  And how can we keep failure – or the fear of it — from derailing us?

1.  Don’t make it personal.  Separate the failure from your identity. Just because you haven’t found a successful way of doing something (yet) doesn’t mean you are a failure.  These are completely separate thoughts, yet many of us blur the lines between them.  Personalizing failure can wreak havoc on our self-esteem and confidence.

There was a man who failed in business at age 21; was defeated in a legislative race at age 22; failed again in business at 24; overcome the death of his fiancée at 26; had a nervous breakdown at 27; lost a congressional race at 34; lost a senatorial race at age 45; failed to become Vice President at age 47; lost a senatorial race at 49; and was elected as the President of the United States at the age of 52. This man was Abraham Lincoln. He refused to let his failures define him and fought against significant odds to achieve greatness.

2.  Take stock, learn and adapt. Look at the failure analytically — indeed, curiously — suspending feelings of anger, frustration, blame or regret. Why did you fail? What might have produced a better outcome? Was the failure completely beyond your control? After gathering the facts, step back and ask yourself, what did I learn from this?  Think about how you will apply this newfound insight going forward.

Thomas Edison reportedly failed 10,000 times while he was inventing the light bulb. He was quoted as saying, “I have found 10,000 ways something won’t work. I am not discouraged, because every wrong attempt discarded is another step forward.” The Wright brothers spent years working on failed aircraft prototypes and incorporating their learnings until they finally got it right: a plane that could get airborne and stay there.

3.  Stop dwelling on it. Obsessing over your failure will not change the outcome. In fact, it will only intensify the outcome, trapping you in an emotional doom-loop that disables you from moving on. You cannot change the past, but you can shape your future. The faster you take a positive step forward, the quicker you can leave these debilitating, monopolizing thoughts behind.

Don Shula is the winningest coach in the NFL, holding the record for most career wins (including two Super Bowl victories) and the only perfect season in NFL history.

Shula had a “24-hour rule,” a policy of looking forward instead of dwelling on the past. The coach allowed himself, his staff and his players 24 hours to celebrate a victory or brood over a defeat. During those 24 hours, Shula encouraged them to feel their emotions of success or failure as deeply as they could. The next day, it was time to put it behind them and focus their energy on preparing for their next challenge. His philosophy was that if you keep your failures and victories in perspective, you’ll do better in the long run.

4.  Release the need for approval of others.Often our fear of failure is rooted in our fear of being judged and losing others’ respect and esteem. We easily get influenced (and spooked) by what people say about us. Remember, this is your life, not theirs.  What one person considers to be true about you is not necessary the truth about you, and if you give too much power to others’ opinions, it could douse your passion and confidence, undermining your ability to ultimately succeed.

Oprah Winfrey was fired from her first TV job because someone thought she was “unfit for TV.” Stephen King’s first book, Carrie, was rejected by 30 publishers. Walt Disney was fired from his newspaper job because he “lacked imagination and good ideas.” Winston Churchill failed sixth grade and was considered “a dolt” by his teacher. Jerry Seinfeld was booed off the stage the first time he tried comedy. Soichiro Honda was rejected by an HR manager at Toyota Motor Corporation when he applied for an engineering job, leaving him jobless until he began making scooters in his garage and eventually founded Honda Motor Company. ‘Nuff said.

5.  Try a new point of view.  Our upbringing – as people and professionals – has given us an unhealthy attitude toward failure. One of the best things you can do is to shift your perspective and belief system away from the negative (“If I fail, it means I am stupid, weak, incapable, and am destined to fall short”) and embrace more positive associations (“If I fail, I am one step closer to succeeding; I am smarter and more savvy because the knowledge I’ve gained through this experience”).

Indeed, one can hardly find an historic or current-day success story that isn’t also a story of great failure.  And if you ask those who have distinguished themselves through their achievements, they will tell you that failure was a critical enabler of their success.  It was their motivator.  Their teacher.  A stepping stone along their path to greatness.  The difference between them and the average person is that they didn’t give up.

Michael Jordan said it best: “I have missed more than 9,000 shots in my career. I have lost almost 300 games. On 26 occasions I have been entrusted to take the game winning shot, and I missed. I have failed over and over and over again in my life. And that is why I succeed.”