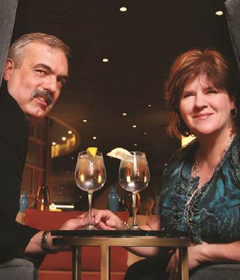 Todd and Joni B. are high school sweethearts who live in the same small Washington logging community they grew up in. Just hard working people with the No. 1 goal of raising their three boys to be happy and productive, life was always a struggle financially because the local sawmill was their major source of income.While Joni worked stints as a waitress, a mill worker and small franchise owner, ultimately her focus was raising her kids. She had always been a positive, happy person, but the stresses of raising their sons and struggling with her weight and finances for years began to take a toll. She began to lose her bright personality and describes it as losing her “happy.”

Not long after, her girlfriend Shauna told her about Isagenix and how it could help with some of her struggles, but she couldn’t listen. She just didn’t think she could go down the road of trying to lose weight again. Plus, getting involved in the business just seemed like too much, the timing wasn’t right. She was already too overwhelmed with her own issues and had no energy to put effort into it.

It wasn’t until she stepped onto the basketball court at one of her son’s games for parents’ night that she had a wake-up call. She was embarrassed about how she looked and she wondered what she was doing to herself. Fortunately, her friend Shauna had been persistent for 21 months and Isagenix quickly came to mind as a possible solution. Initially, with her first system, she lost 11.25 pounds* which gave her hope. She says cleansing wasn’t easy or hard; just incredibly doable.

“I didn’t understand Isagenix at first because I didn’t know what cleansing was. If I couldn’t make good eating decisions for two days on my own, how was I going to be able to cleanse for two days?” shares Joni with a laugh. “But when I started the cleanse, I just knew I had to stick with the system. Every day got better and I got stronger.”

As she used the products, she knew she was going to start the business, it made way too much common sense. She was convinced that the results were enough for people to get on board.

“We have a clean, powerful system created by a passionate formulator (Founder John Anderson) and one that people really need,” says Joni. “The strength in leadership also goes beyond what someone would need to feel secure and our compensation plan rewards proper behavior. Thank you, Jim and Kathy Coover.”

While her Isagenix business began to get off the ground, she hit an incredible milestone on the scale; she lost 100 pounds.* Soon, she was on her way to getting her “happy” back.

Her initial goal with her Isagenix business was to make $6,000 a month like her friend Shauna.** But that ended up being just the beginning, especially after her husband encouraged her and helped her believe in herself even more. She attributes her success to not only that support, but also “just being a good girlfriend and doing the right thing.”

“I kept it simple and real. I just focused on sharing girlfriend to girlfriend,” says Joni. “I kept myself available and always growing in what was happening with the company. That was my responsibility to myself and to anyone else I brought into the business. I believe your team’s success should always be your No.1 goal.”

With her success, she set bigger goals such as being able to help her husband leave his 30-year career at the sawmill. Soon, she was earning in one month what her husband made in a year** and the extra income allowed him to walk away from the sawmill at age 50, more than a decade before his expected retirement.

In early 2009, the pair hit $1 million in cumulative earnings and were named the 30th Isagenix millionaires. The couple is passionate about network marketing, which they call “the last frontier for everyday people to achieve extraordinary wealth.” Now they’re focused on leaving their leadership legacy and helping their teams experience the same success by being responsible coaches, mentors and friends. They’ve already helped to create seven six-figure earners within their teams and they’re not stopping there.

“That’s what I truly love giving people today: hope with their health and hope with their wealth,” says Joni. “I feel like my job is to empower people. I want people to walk away from a meeting with me or a phone call and say they can do it, too.”

All three of the boys love and use the Isagenix products and help each other with the business center they are growing. Joni loves to see the growth they are experiencing with their own residual incomes.

“Isagenix has helped me to grow in every area of my life. When someone can take away the financial stress, it allows them to do more of what I believe most people love to do and that means to give of yourself and your time to others,” says Joni. “I can focus on family, friends and empowering others. That’s what really lights me up.”

Joni says she’s been honored to receive the “Women of Isagenix” Award for her dedication, the “Spirit of Isagenix” Award for her determination and attitude, and is humbled to be one of the top 25 income earners in the company. Her biggest tip for success is that this is a business so treat it as such. She finds it best summed up by something her friend Shauna just shared with her.

She’s incredibly grateful for the relationships she and her husband have made through their Isagenix team and says she believes it’s because of everyone working together that they’ve achieved such amazing success. She’s quick to point out that it’s not out of reach for others as they’re watching it happen throughout their entire team.

“Isagenix isn’t just creating satisfied customers; it’s creating raving fans. That’s why the company grew by 30 percent last year while everyone else around us didn’t,” says Joni. “Isagenix is such a ‘win win’ for everyone.”

The individuals pictured are actual Isagenix Associates and not paid models.

*The weight-loss testimonials presented apply only to the individuals depicted, cannot be guaranteed, and should not be considered typical. A 2008 university study showed a statistically significant weight loss of 7 pounds (3.2 kg) during the first nine days of the Cleansing and Fat Burning System.

**Earning levels for Isagenix® Associates should not be construed as representative of fixed or typical incomes earned with an Isagenix business, nor are they intended to represent that other Associates will eventually achieve the same level of income. Income level achievements are dependent upon individual business skills, personal ambition, timing, commitment, activity and demographic factors.