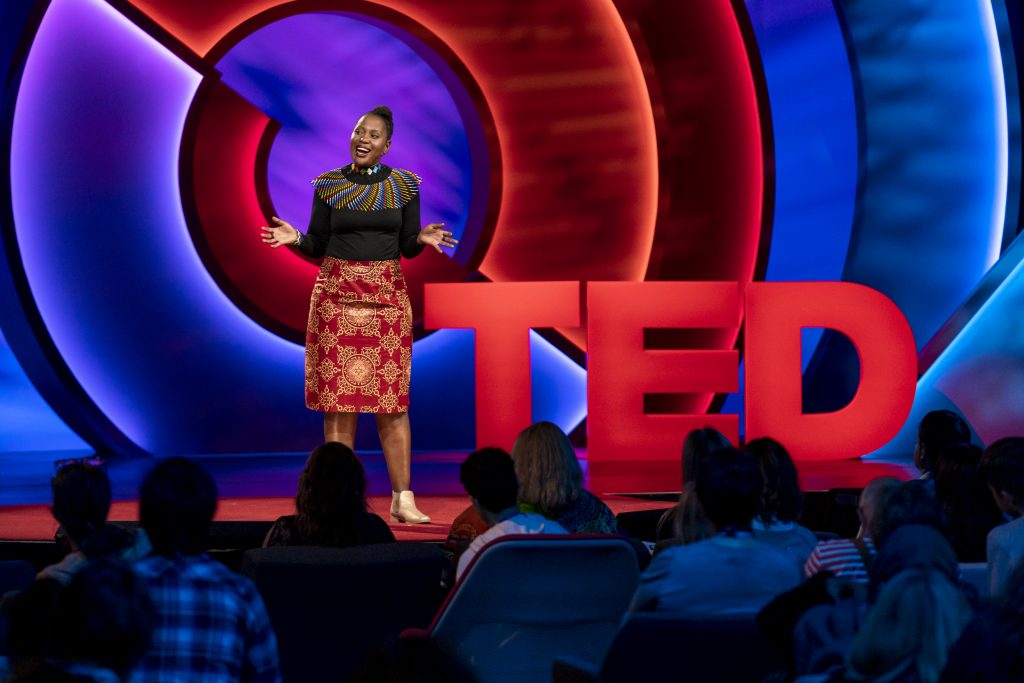 What’s your passion? Social entrepreneur Noeline Kirabo reflects on her work helping out-of-school young people in Uganda turn their passions into profitable businesses — and shares the two questions you can ask yourself to begin doing the same.
Transcript
When you have a job that pays you enough to cover your basic needs, your bills, and even some more to spend, the assumption is that you’d be happy, or, even better, fulfilled. And it seems unthinkable when you wake up and say you’re going to leave a job like that to pursue a passion. And that was my dilemma six years ago. I had a comfortable job, I lived a comfortable life, and people expected me to be fulfilled, but I wasn’t. There was something in me that wanted more. There was a misalignment between the things I did on a daily basis and the things that I deeply cared about.
00:39

And so I decided to quit and explore the possibility of bringing this passion into my daily routine. And the thing about finding your passion is that it’s not straightforward. Even for people with money and degrees, still struggle to identify their passion. And here I was as a 30-year-old, talking about finding my passion and turning it into a career. Literally, people told me, “You don’t talk about passion until you’ve made enough money —

For many of us, we’ve been led to believe that life is a race of survival. We’ve been conditioned to see ourselves as survivors that must do everything in our power to survive. In Africa, we’re nurtured to go through school, cram, and pass, in the hope that you get a job after. And if you do, stick at it no matter how much it sucks.

Until you get a better offer or you’re asked to retire. And as a dropout, I knew that I was not entitled to anything. Every opportunity was a privilege. And so when I thought about quitting, it was a huge risk.

I was given two alternatives, which are the most popular in Africa. The first one is to sign up for any course at a vocational institution and do it. My second option, settle for any job offer you can get, no matter the working conditions, and do it. That probably explains why we have so many of our young people being trafficked in search of greener pastures.

I opted for the first option. I did look at a couple of vocational institutions in the hope that I would find a course that resonated with my persona, my dream, and my aspiration. I was disappointed to learn that there was no room for misfits like me in these institutions. The education system in many parts of the world has been designed around preselected options that young people are expected to fit in or risk becoming misfits. And so going through school, I was nurtured and conditioned to think in the straight line and stay within the straight line.

But when I dropped out, I discovered a world of possibilities. I knew I could be anything, I could study anything, and so I leveraged free online courses. That’s how I built my CV, got into employment, and worked for eight years. And after eight years, I told myself there must be more to life than just going through the routines of life.

So in 2014, I started an organization called Kyusa where we are working with out-of-school youth and empowering them to turn their passions into profitable, scalable, and sustainable businesses.

Now, when we talk about passion, one of the most common questions that people ask is, “What is passion? How do I even find it?” And in the simplest definition, passion is a collection of your life experiences that give you the deepest sense of fulfillment. And to identify your passion, you need to look inward. So we use two reflective questions. The first question we ask is, “If you had all the time and the money in the world, what would you spend your time doing?” It sounds like a very simple question, but many people struggle to answer this question because they’ve just never thought about it.

The second question we ask is, “What makes you happy or gives you the deepest sense of fulfillment?” Now, you would assume that we all know what makes us happy, but it’s also interesting to note that so many people have no idea what makes them happy because they are so busy going through the routines of life, they’ve never stopped to look inward. And so identifying the things that give us a deep sense of fulfillment and the things that give us deep joy are thoughts that begin to direct us in the direction of our passion. And just in case you’re wondering what your answers are to those two questions, I invite you to sit with these questions later and just reflect about it.

However, I am also aware that passion alone cannot guarantee success in life. And I should note that not every passion can become a career. For passion to become a career, it must be coupled with the right set of skills, conditioning, and positioning. So when we get our young people to look inward, we also ask them what skills do you have, what talents do you have, what experience do you have that you can use to build a niche in the marketplace. But more than that, we also look at the market trends, because it doesn’t matter how much you love and enjoy it. If nobody wants it or is willing to pay for it, it can’t be a career. It’s just a hobby.

And the third thing we look at is how do you position yourself? Who are you targeting? Who do you want to sell to? Why would they want to buy from you? And so the combination of the three is what enables you to move from just a passion to a business. And many of our young people have been able to turn their ideas and burning desires into profitable businesses or social enterprises, and they’re not just creating jobs, but they are solving societal challenges.

I’ll share with you two examples. One of them is Esther. I met Esther two years ago. She had been out of school for two years, and she had been deeply affected by her dropping out. As a result, she had experienced severe depression to a point where she attempted to take her own life several times. Her friends and family didn’t know what to do for her. They simply prayed for her. When I met Esther and I started to converse with her, I asked her a simple question. I said, “If you had all the time and the money in the world, what would you do?” Without thinking or hesitation, her eyes lit up and she began to tell me how she wanted to change the lives of young people. She wanted to restore hope and dignity to other teenagers by helping them make informed decisions about life.

I was certain of the fact that this burning desire in her was unquenchable. And so we worked with Esther to put a framework around this desire. Today, she runs a social enterprise in her village, raising awareness about substance abuse, mental health, sexual reproductive health and is helping other school dropouts acquire vocational skills, so they can make a living for themselves. Esther turned 20 this year, and for the last two years, she has organized an annual teen fest that brings together over 500 teenagers.

Young people that are able to network and collaborate on different projects, but more importantly to meet professionals they would otherwise never have met.

This is all engineered by a girl that believed the world had no room for her, that without education she would never amount to anything. But by looking inward and tapping into a burning desire, putting structure around it, it has become a model that not only changed her life but is transforming the lives of hundreds of young people every year.

My other example is Musa. Musa is a natural artistic guy. He’s the kind that would look at any design and replicate it with ease. And so he seeks to recognize that ability in him. When I met Musa, he was doing all kinds of crafts — bags, belts, wallets — but it was more of a part-time thing. Or sometimes, if he was really broke and needed to make quick money, then he would come up with a design and sell it. But he had never thought of it as a business.

We started working with Musa, helping him shift his mindset from a hobby to a business and beginning to rethink how he can make products that he could sell and even be able to scale. Musa makes some of the most amazing bags I’ve ever seen, and over the last one year, Musa’s business has grown. He has been recognized in different places. Currently, he’s talking about exporting to developed countries.

Musa, like any other dropout, believed that without academic credentials, he wouldn’t amount to anything. He thought the talent he had was nothing simply because he did not have an academic paper to define him. But by looking inward and finding that what he had was the greatest asset and supporting him to turn it into a business, he’s not just living — he’s thriving.

The thing about looking inward is that it can be scary, especially if you’re doing it for the first time. But the truth is you never truly start living until you learn to live from the inside out. And in unlocking potential, we need to look inward to identify the things that give us a deep sense of fulfillment, the things that give us the deepest joy, and then weave them into the patterns of our daily routines. In so doing, we cease to work and we start to live. And the thing about living is that you never have to retire or to resign.

When you cease to work and you live, when passion becomes a career, you don’t just excel, you become unstoppable.

NOTE: This talk was presented at an official TED conference. TED’s editors chose to feature it for you.
Noeline Kirabo self-educated her way out of the slums of Kampala, Uganda. Now she helps vulnerable youth gain skills to turn their passions into profitable businesses.
Source: ted.com ~ By: Noeline Kirabo ~ Image: ted.com