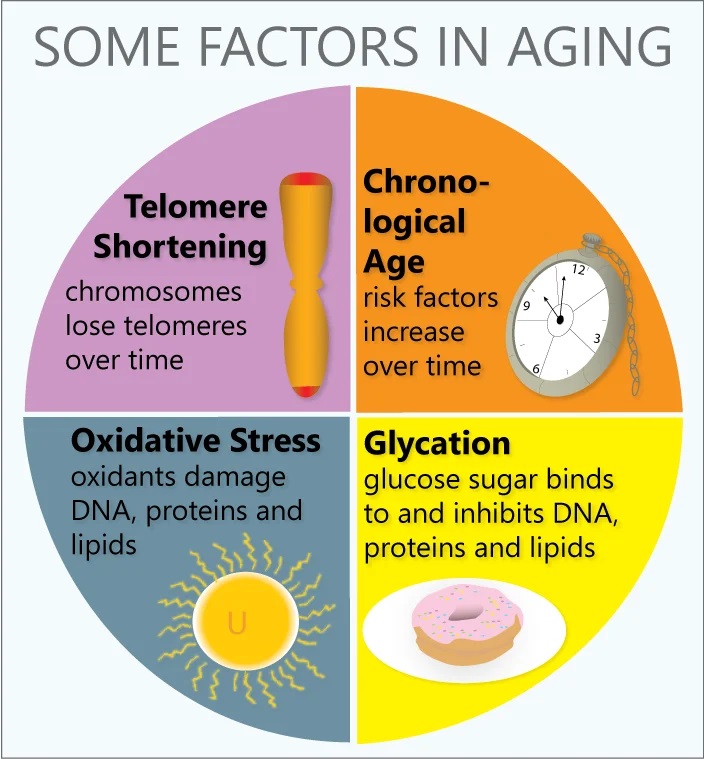 Inside the nucleus of a cell, our genes are arranged along twisted, double-stranded molecules of DNA called chromosomes. At the ends of the chromosomes are stretches of DNA called telomeres, which protect our genetic data, make it possible for cells to divide, and hold some secrets to how we age and get cancer.

Telomeres have been compared with the plastic tips on shoelaces because they keep chromosome ends from fraying and sticking to each other, which would destroy or scramble an organism’s genetic information.

Yet, each time a cell divides, the telomeres get shorter. When they get too short, the cell can no longer divide; it becomes inactive or “senescent” or it dies. This shortening process is associated with aging, cancer, and a higher risk of death. So telomeres also have been compared with a bomb fuse. 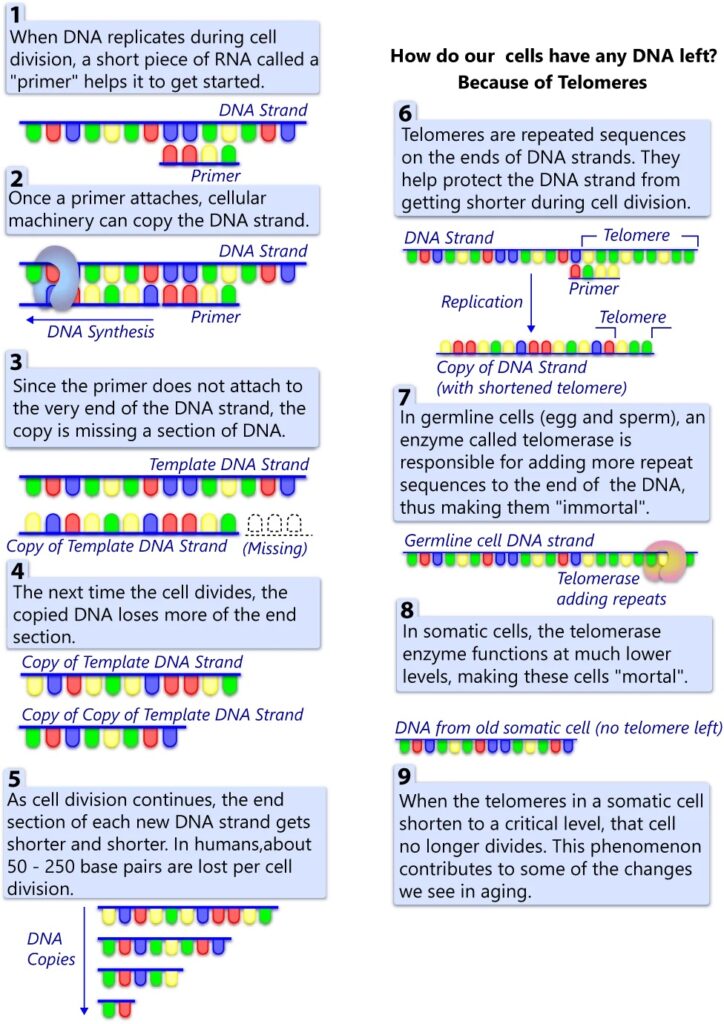 Like the rest of a chromosome, including its genes, telomeres are sequences of DNA  chains of chemical code. Like all DNA, they are made of four nucleic acid bases: G for guanine, A for adenine, T for thymine, and C for cytosine.

Telomeres are made of repeating sequences of TTAGGG on one strand paired with AATCCC on the other strand. Thus, one section of telomere is a “repeat” made of six “base pairs.”

In white blood cells, the length of telomeres ranges from 8,000 base pairs in newborns to 3,000 base pairs in adults and as low as 1,500 in elderly people. (An entire chromosome has about 150 million base pairs.) Each time it divides, an average cell loses 30 to 200 base pairs from the ends of its telomeres.

Cells normally can divide only about 50 to 70 times, with telomeres getting progressively shorter until the cells become senescent or die.

Telomeres do not shorten in tissues where cells do not continually divide, such as heart muscle.

Why do chromosomes have telomeres?

Without telomeres, the main part of the chromosome  the part with genes essential for life  would get shorter each time a cell divides. So telomeres allow cells to divide without losing genes. Cell division is necessary for growing new skin, blood, bone, and other cells.

Without telomeres, chromosome ends could fuse together and corrupt the cell’s genetic blueprint, possibly causing malfunction, cancer, or cell death. Because broken DNA is dangerous, a cell has the ability to sense and repair chromosome damage. Without telomeres, the ends of chromosomes would look like broken DNA, and the cell would try to fix something that wasn’t broken. That also would make them stop dividing and eventually die.

Why do telomeres get shorter each time a cell divides?

Before a cell can divide, it makes copies of its chromosomes so that both new cells will have identical genetic material. To be copied, a chromosome’s two DNA strands must unwind and separate. An enzyme (DNA polymerase) then reads the existing strands to build two new strands. It begins the process with the help of short pieces of RNA. When each new matching strand is complete, it is a bit shorter than the original strand because of the room needed at the end for this small piece of RNA. It is like someone who paints himself into a corner and cannot paint the corner.

An enzyme named telomerase adds bases to the ends of telomeres. In young cells, telomerase keeps telomeres from wearing down too much. But as cells divide repeatedly, there is not enough telomerase, so the telomeres grow shorter, and the cells age.

Telomerase remains active in sperm and eggs, which are passed from one generation to the next. If reproductive cells did not have telomerase to maintain the length of their telomeres, any organism with such cells would soon go extinct.

As a cell begins to become cancerous, it divides more often, and its telomeres become very short. If its telomeres get too short, the cell may die. Often times, these cells escape death by making more telomerase enzyme, which prevents the telomeres from getting even shorter.

Many cancers have shortened telomeres, including pancreatic, bone, prostate, bladder, lung, kidney, and head and neck.

Measuring telomerase may be a way to detect cancer. And if scientists can learn how to stop telomerase, they might be able to fight cancer by making cancer cells age and die. In one experiment, researchers blocked telomerase activity in human breast and prostate cancer cells growing in the laboratory, prompting the tumor cells to die. But there are risks. Blocking telomerase could impair fertility, wound healing, and the production of blood cells and immune system cells.

While telomere shortening has been linked to the aging process, it is not yet known whether shorter telomeres are just a sign of aging  like gray hair  or actually contribute to aging.

If telomerase makes cancer cells immortal, could it prevent normal cells from aging? Could we extend lifespan by preserving or restoring the length of telomeres with telomerase? If so, would that increase our risk of getting cancer?

Scientists are not yet sure. But they have been able to use telomerase in the lab to keep human cells dividing far beyond their normal limit, and the cells do not become cancerous.

If we used telomerase to “immortalize” human cells, we may be able to mass produce cells for transplantation, including insulin-producing cells to cure diabetes, muscle cells for treating muscular dystrophy, cartilage cells for certain kinds of arthritis, and skin cells for healing severe burns and wounds. An unlimited supply of normal human cells grown in the laboratory would also help efforts to test new drugs and gene therapies.

How big is the role of telomeres in aging? 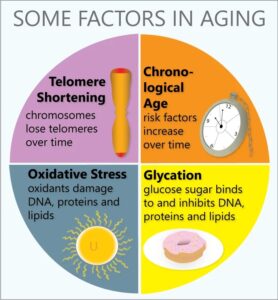 Some long-lived species like humans have telomeres that are much shorter than species like mice, which live only a few years. Nobody knows why. But it’s evidence that telomeres alone do not dictate lifespan.

Cawthon’s study found that when people are divided into two groups based on telomere length, the half with longer telomeres lives an average of five years longer than those with shorter telomeres. This study suggests that lifespan could be increased five years by increasing the length of telomeres in people with shorter ones.

After age 60, the risk of death doubles every 8 years. So a 68-year-old has twice the chance of dying within a year compared with a 60-year-old. Cawthon’s study found that differences in telomere length accounted for only 4% of that difference. And while intuition tells us older people have a higher risk of death, only 6% is due purely to chronological age. When telomere length, chronological age, and gender are combined (women live longer than men), those factors account for 37% of the variation in the risk of dying over age 60. So what causes the other 63%?

A major cause of aging is “oxidative stress.” It is the damage to DNA, proteins, and lipids (fats) caused by oxidants, which are highly reactive substances containing oxygen. These oxidants are produced normally when we breathe, and also result from inflammation, infection, and consumption of alcohol and cigarettes. In one study, scientists exposed worms to two substances that neutralize oxidants, and the worms’ lifespan increased an average 44%.

Another factor in aging is “glycation.” It happens when glucose, the main sugar we use as energy, binds to some of our DNA, proteins, and lipids, leaving them unable to do their jobs. The problem becomes worse as we get older, causing body tissues to malfunction, resulting in disease and death. Glycation may explain why studies in laboratory animals indicate that restricting calorie intake extends lifespan.

Most likely oxidative stress, glycation, telomere shortening, and chronological age  along with various genes  all work together to cause aging.

Telomeres and other diseases 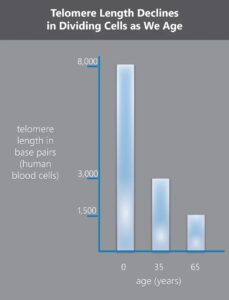 People with a disease named dyskeratosis congenita have telomeres that get short much more quickly than normal. These people endure premature aging and death. They face a higher risk of life-threatening infections, leukemia and other blood cancers, intestinal disorders, cirrhosis of the liver, and pulmonary fibrosis, a deadly stiffening of lung tissue. They also are more likely to endure gray hair, balding, poor wound healing, spots on the skin, intestinal disorders, softening of the bones, and learning disabilities. The implication is that telomeres may play a role in all those conditions, because they all involve tissues in which cells divide often. There also is some evidence linking shortened telomeres to Alzheimer disease, hardening of the arteries, high blood pressure, and type 2 diabetes.

What are the prospects for human immortality? 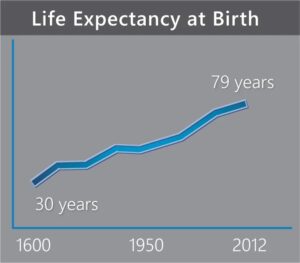 Human lifespan has increased considerably since the 1600s, when the average lifespan was 30 years. By 2012, the average US life expectancy was nearly 79. Reasons for the increase include sewers and other sanitation measures, antibiotics, clean water, refrigeration, vaccines and other medical efforts to prevent children and babies from dying, improved diets, and better health care.

Some scientists predict average life expectancy will continue to increase, although many doubt the average will ever be much higher than 90. But a few say vastly longer lifespans are possible.

Cawthon says that if all processes of aging could be eliminated and oxidative stress damage could be repaired, “one estimate is people could live 1,000 years.”