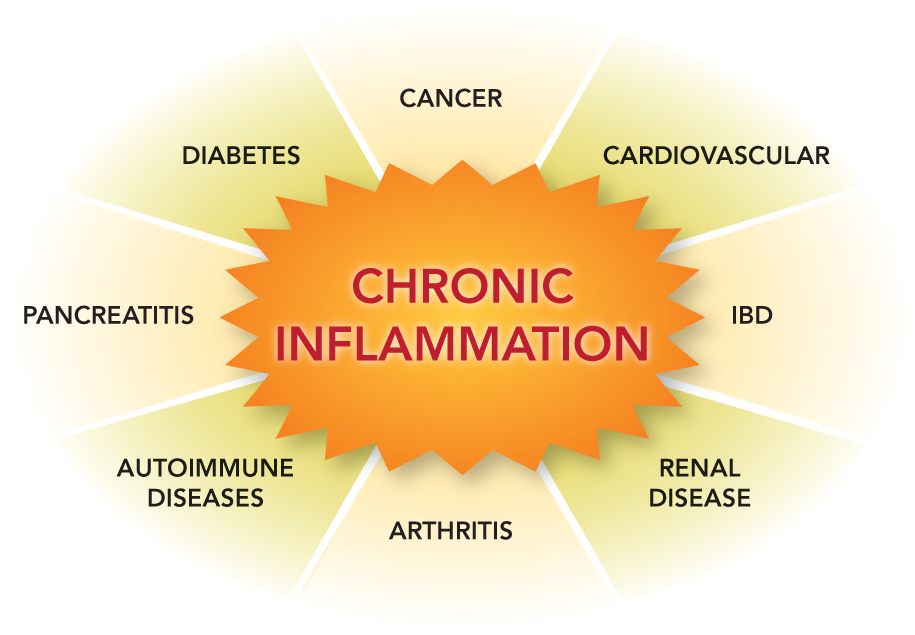 The term “inflammation” has been popping up everywhere lately, right? Whether you’re reading about anti-inflammatory diets or having brunch with your friend who won’t shut up about the (admittedly pretty excellent) benefits of probiotics, inflammation has become weirdly… trendy. But it’s also confusing—after all, isn’t “inflammation” also what happens when you slam your finger in a door?

How can something that seems so basic also be the cause of heart disease or depression? With a little help from the experts, we broke down the different types of inflammation—so the next time your hypochondriac friend brings up the subject, you’ll be ready.

This is the kind that happens when you stub your toe—in this case, inflammation is part of the body’s natural defense against invaders like bacteria and part of the system that repairs damaged tissue after an injury.

This classic biology textbook illustration shows what happens when you get a splinter, for instance: First, defense cells recognize that something is wrong and send out the signal for other cells to report to duty. In response, mast cells release chemicals that cause the blood vessels in the area to dilate. This creates little holes that allow white blood cells and fluid to exit the vessel, begin to fight the invading microbes, and heal any tissue damage. And that fluid is what causes swelling. Once the injury is fixed, the micro war is over, and everything goes back to normal.

Of course, your body doesn’t always do what it’s supposed to. Allergic reactions happen when your body mistakenly identifies a substance as harmful and releases antibodies, triggering the above battle scene—even though there’s really nothing to fight. And sometimes it doesn’t even take a full-on allergy—just a milder intolerance—to make that happen.

“If you’re putting something in your body that it doesn’t agree with, that can set off an inflammatory reaction and a whole host of issues,” says Deepa Verma, M.D., AIHM. Those issues can be the classic allergy symptoms like itchy eyes and a runny nose—or potentially less-obvious responses, like bloating or irritable bowel syndrome.

While inflammation is a natural part of the healing process, when it’s constantly being triggered—whether by potentially harmful microbes or cases of mistaken identity (allergies and stress)—that can lead to a dangerous situation.

Josh Axe, DNM, DC, CNS, says that long-standing inflammation is often an underlying finding in autoimmune diseases. “Over time, this can lead to an increased risk of many serious conditions, including heart disease and cancer. Not only that, but it can also exacerbate symptoms of inflammatory diseases like Crohn’s and rheumatoid arthritis.”

It would be handy if chronic inflammation were as obvious as an ingrown toenail, but Axe says it often takes a more subtle form before it leads to those above-mentioned diseases.

“Fatigue, extra belly fat, high blood sugar, and digestive problems are a few of the symptoms that may signify chronic inflammation,” he says.

The science on how inflammation affects the body is still relatively new. Some diseases aren’t necessarily caused by inflammation, but inflammation can trigger their worst symptoms. We know that inflammation of the intestines in Crohn’s and ulcerative colitis causes intense pain, diarrhea, and nausea, as it becomes difficult for food to pass through the GI tract and for nutrients to be absorbed through the intestinal wall. The autoimmune diseases rheumatoid arthritis and lupus also result in inflammation throughout the body.

The list of correlations (but not quite causation) goes on: Studies have shown that the proteins released during the inflammatory process might promote cancerous tumor growth. Obesity can cause inflammation in adipose tissue (wherever the body stores fat), which in turn makes the body resistant to insulin (leading to diabetes).

Studies have shown that suppressing inflammation with drugs can drastically reduce the risk for heart attack and stroke. They’re still trying to work out the details as to why that works, but the prevalent theory, according to the American Heart Association, is that the immune system forms a blood clot around ruptured cholesterol plaque, which in turn blocks the flow of blood to the heart or brain. Researchers have concluded that both Alzheimer’s disease and depression are the result of inflammation in the brain.

Just as aspirin and ibuprofen help the swelling and pain in your muscles, those anti-inflammatory drugs have been shown to help chronic symptoms too. Corticosteroids are the next-level solution, used to treat serious issues like asthma.

But scientists such as Adam Moeser, an associate professor at Michigan State University’s College of Veterinary Medicine, are working on a way to target the process before it even starts. He and his team discovered the receptors in mast cells that signal an immune response during stress, and the next step is to figure out how to block that receptor from setting off a false alarm.

Can You Eat Your Way Out Of This?

According to Axe, such staples as corn and soybean oils, pasteurized dairy, processed meat, and refined carbohydrates can promote inflammation in the body—and there’s research to back that up. And if one of Verma’s patients complains of any inflammation-related symptoms, she tests their blood to determine any underlying food intolerance that may be triggering a histamine reaction.

More importantly, there’s a lot of evidence out there about the good foods we should be eating to prevent inflammation. That good-old Mediterranean diet—lots of grains, fruits, and vegetables; a little red meat; plenty of fish—is an easy place to start. Foods high in fiber promote healthy gut bacteria, so you’ll keep those intestines happy. And fruits and vegetables rich in antioxidants, like blueberries and leafy greens, help the body neutralize the free radicals that cause inflammation.

“Oftentimes, medications are used to simply treat symptoms without treating the root of the problem,” Axe says. “I’ve had several patients with heart disease taking a slew of medications designed to lower cholesterol levels and keep blood pressure in check. Ultimately, upping their intake of anti-inflammatory foods like fruits and vegetables has actually been key to reversing heart disease, restoring heart health, and going medication-free.”

Just don’t go thinking you can have a salad and be done with this process. “Going back to old eating habits will cause symptoms to return and will continue to wreak havoc on health,” Axe warns.

If this article has alarmed you in any way, don’t panic—stress may also be a factor in inflammation (fun!), and it seems like we have our prehistoric ancestors to blame.

“If we’re faced with any kind of stress, the body responds initially with immune activations to protect ourselves while we decide between fight or flight,” Moeser says.

Retraining the brain from its primitive fight-or-flight patterns can be done through self-care practices such as yoga and meditation—and another proven method is just to hit the gym. “Besides switching up your diet, getting in more regular physical activity can also have a major impact on alleviating inflammation,” Axe says.

When you’re done with your workout, go hang out with your friends—science says it’s a way to lessen inflammation. Whether you choose to talk their ears off about inflammation, of course, is on you.