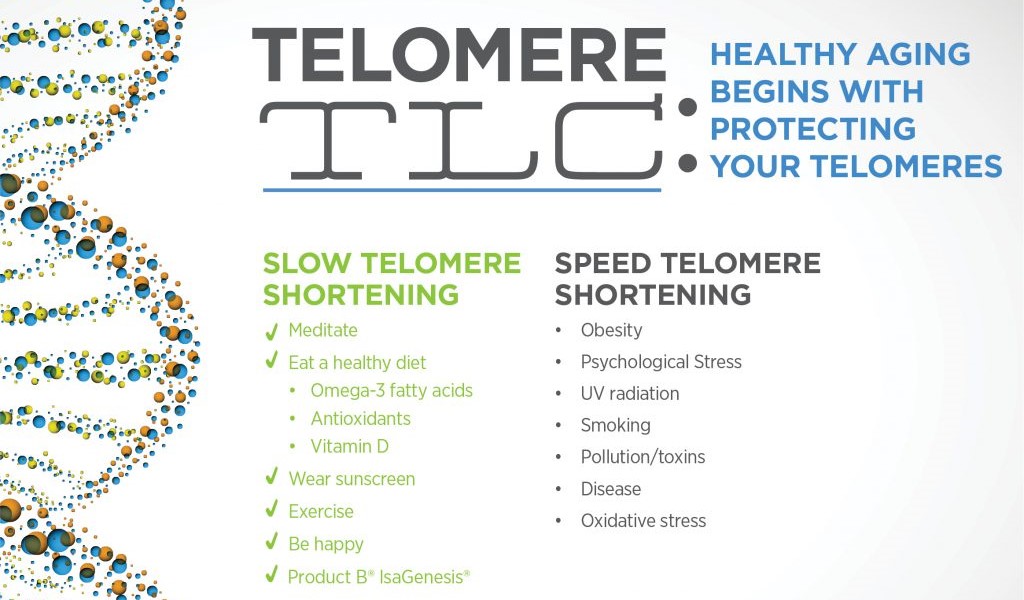 Since their discovery more than 75 years ago by the Nobel Laureate geneticist Hermann Müller, telomeres have attracted worldwide attention among scientists investigating the aging process.

Telomeres are the protective caps on the ends of chromosomes composed of short DNA sequences protecting our DNA and genetic material from damage. Another Nobel Laureate, Elizabeth Blackburn, likened telomeres to the little plastic caps on the ends of shoelaces (aglets).

Under normal conditions, when a cell divides, telomeres shorten. If they grow too short, they reach what’s known as the Hayflick limit (named after the esteemed gerontologist Leonard Hayflick), and the protective capacity of the telomere decreases. Real-world relevance of telomere shortening can be observed during the aging process in humans when comparing the length of telomeres from newborns (8,000 base pairs) to adults (3,000 base pairs) to elderly individuals (1,500 base pairs).

Therefore, because several disease states and pathological processes have been linked to telomere shortening, several academic laboratories and companies have explored intervention strategies to slow down the rate of telomere attrition.

Several lifestyle factors can also significantly affect telomere health and the rate of telomere shortening. Among the most studied factors associated with shorter telomeres are psychosocial: depression, anxiety, and childhood adversity (1,2). Other lifestyle factors associated with telomere length include smoking, physical activity, drugs and toxins, and oxidative stress. Indeed, the decades of research implicating oxidative stress in the aging process has recently begun addressing and demonstrating a similarly deleterious role of oxidative stress on telomere length (3-5). As a result, antioxidant intake and subsequent plasma concentrations may be newly emerging biomarkers of telomere status (6-8).

Oxidative stress is defined as an overabundance of reactive oxygen species (ROS). Excessive oxidative stress damages DNA, proteins, and lipids. While ROS are produced under normal conditions, oxidative stress occurs under conditions of poor health. To prevent oxidative stress, the body requires antioxidant nutrients such as glutathione precursors like the amino acid cysteine (found in IsaLean® Shakes) along with specific enzymes (9,10). Among these antioxidant enzymes is catalase, which functions to convert toxic and DNA-damaging hydrogen peroxide (H2O2) into water (11,12).

With this is mind, Isagenix partnered with scientists in the School of Nutrition and Health Promotion at Arizona State University to conduct a clinical evaluation in an independent, randomized, placebo-controlled, double-blinded study to evaluate Product B’s effect on catalase and other enzymes. Third-generation Product B contains a proprietary blend of plant botanicals, antioxidants, and other bioactives that provide significant protection against telomere shortening in cellular systems.

However, obtaining clinical support as a potential natural product against telomere shortening proved difficult due to analytical shortcomings and methodological issues in measuring telomere length. For this reason most studies considering the impact of dietary, environmental, or lifestyle factors on telomeres are frequently observed in studies with thousands of study participants.

In this study researchers had subjects consume either Product B or a placebo for 12 weeks and observed that subjects supplemented with Product B demonstrated a significant elevation of catalase in red blood cells (increase by 30 percent vs. placebo). Considering the role catalase may play in the aging process, this was very exciting news and the relevance of this finding was not lost on the researchers, who commented, “The increase in catalase observed by Product B is an exciting development considering the relationship between the enzyme and increased lifespan in animal studies.”

Now, Isagenix has developed fourth generation Product B® IsaGenesis®, which contains a novel lipid-soluble blend to increase absorption and bioavailability.

Clinical and experimental evidence is slowly emerging supporting the benefits of the nutritional antioxidants, plant botanicals, and other bioactives provided by Ageless Essentials™ Daily Pack, containing Product B IsaGenesis, IsaOmega Supreme®, C-Lyte®, Essentials for Men™ or Essentials for Women™, and Ageless Actives™.

In conjunction with a healthy diet, weight and stress management, quality and sufficient sleep, and regular exercise, Product B IsaGenesis may provide the most optimal protection against age-accelerated telomere shortening and a longer, healthier life.