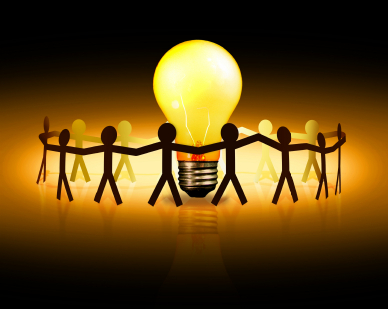 Have you ever tried to come up with an idea?

One stellar, or at least really good, idea?

Of course you have. You’re an entrepreneur. Ideas are your stock in trade.

When you said to yourself, “Hey self, we need a stellar, or at least a really good idea,” what happened? I’ll bet it was one of two things. Either a whole playground of ideas started bouncing around shouting, “Pick me, pick me,” or there was a deafening wall of silence in the space between your ears.

Sorry to break it to you. You’re normal.

That phenomenon isn’t a mutiny of the grey cells, it’s a simple truth about the way the human brain functions. It cannot create and judge at the same time.

Oh you might think you’re doing it if you’re jumping from creation to judgment and back again so fast that you fool yourself into believing the two things are happening simultaneously. But that’s like believing that the first Mickey Mouse cartoons were really moving images when in fact the animation was created by moving from one image to another so rapidly the eye was fooled.

For instance, every time I sit down to write an article or a chapter in my next book the playgroup either erupts or all the ideas play hide and seek. But when I sit down to make a list of all the things I could write about, or want to write about, I get pages of ideas. The minute I start rejecting the ideas that come up the ones I haven’t captured yet disappear as quickly as trolls at the first hint of morning.

Creating and judging are two different brain functions, so coming up with that stellar idea requires letting your brain stay in creative mode long enough for that one idea to make itself heard. It’s not going to be obvious which of the many ideas clamoring for attention is “the one.” When it first shows up it will probably look a lot like all the other ideas. It may not even be as attractive. It might look tougher, or smaller, or weirder and you might easily overlook it at first glance. Only when you let your brain slip into the judgment function and weigh out the strengths of all the ideas impartially will this idea reveal itself as the most awesome idea on the playground of your mind.

Here’s what I do. I issue an open invitation. I let the ideas show up, then I wrangle them into a manageable arrangement. I call it a brain dump.

Grab a notebook. You could use a digital device but studies show us that activities using the tactile senses excite the creative regions of the brain, so a notebook and pen is better. A sketch pad and brightly colored markers may be better yet.

Hold a question in your mind regarding that stellar idea you’re searching for. Maybe it’s a way to solve a cash flow crunch, or deal with a problem employee or client. Maybe you’re in the middle of product development and need a name for your new gadget. Usually, for me, it’s a writing challenge or I’m looking for the best way to help a client. Whatever it is, get it clear and strong in your mind and throw open the floodgates.

Write down what comes. Don’t even think about it, just record it. This will take discipline at first because we’re conditioned to judge. But keep practicing. A lot of my clients get past the judgment hurdle by setting a time limit. If the playground is silent, set a short time limit: “I’m going to write down every idea that comes to mind for five minutes.”

If all the ideas are volunteering at once, make it more like 15 or 30 minutes.

Keep that promise — write down every single idea that comes to mind. No matter how obvious or crazy, it might have value later when you allow your brain to go into judgment mode.

Only when you have exhausted your time limit, or your ideas, should you begin to sort through the list. It’s even more effective if you walk away from the playground for a while. Let that list set for a while. Do a mundane task, or just get away from your desk, then pick it up again.

As you go through the list don’t ask yourself if the idea has merit. Ask instead what needs to be true, or what outcome needs to be reasonably possible, for the idea to have merit. You’ll find that each idea belongs in one of three categories: 1.) Stellar candidates, 2.) Solid propositions, 3.) Possible hidden gems.

Keep sorting until one or two stand a little taller than the rest. Then you will have a stellar idea you can run with.