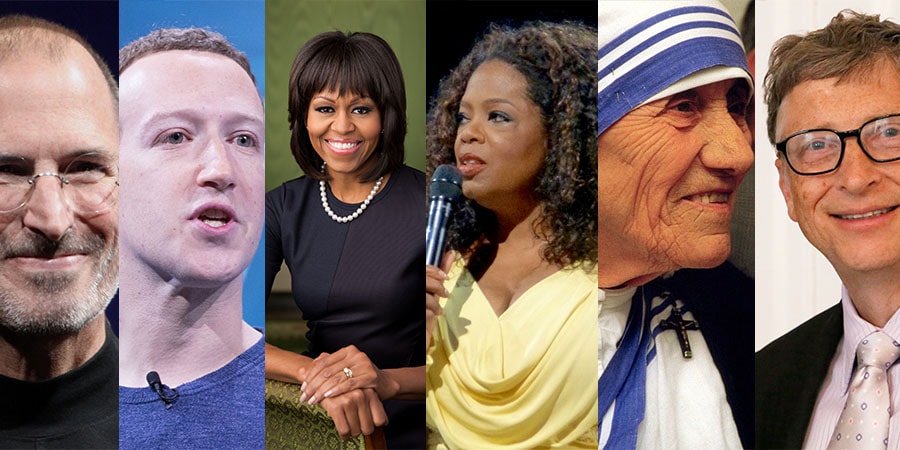 Mentoring is incredibly powerful and important for career success and effective progression. What is more, mentoring is pretty flexible and easy to start too. At PushFar, we define mentoring as the concept of an individual sharing their knowledge, skills and experience to help another to develop and grow. But did you know that some of the most successful people throughout our history have been mentored themselves too? Here are 15 famous mentoring relationships that you should know about.

1. Steve Jobs mentoring Mark Zuckerberg
Two legends who you might just have heard of, to kick-off this article. Steve Jobs and Mark Zuckerberg. The two are said to have taken walks around Palo Alto discussing how Zuckerberg might manage and develop Facebook, as well as entrepreneurship. In 2011, upon Steve’s death, Mark Zuckerberg posted ‘Steve, thank you for being a mentor and a friend. Thanks for showing that what you build can change the world. I will miss you.’

2. Maya Angelou mentoring Oprah Winfrey
Yes, it’s true – even Oprah had a mentor! Of Maya Angelou, Mrs Winfrey said, ‘She was there for me always, guiding me through some of the most important years of my life, Mentors are important, and I don’t think anybody makes it in the world without some form of mentorship.’

3. Father Michael van der Peet mentoring Mother Teresa
Here’s an interesting one. Mentoring is incredible because it can be applied to all aspects of life, personal, professional and even religious. They met in Rome waiting for a bus and became close friends, often chatting and confiding in each other over the years.

4. Christian Dior mentoring Yves Saint-Laurent
Competitors? More mentors. Saint-Laurent became Christian’s personal assistant, learning the secret of the haute couture and how to run the company. ‘Dior fascinated me. I couldn’t speak in front of him. He taught me the basis of my art. Whatever was to happen next, I never forgot the years I spent at his side.’

5. Warren Buffett mentoring Bill Gates
Two of the world’s most successful businessmen, Gates admits that over the years he has turned to Buffett for advice on various subject and has referred to Buffett as a one-of-a-kind. Oh how we would love to be sat at a table with them to find out just what they discuss and the advice that’s shared!

6. Stella Adler mentoring De Niro and Marlon Brando
Stella was a stellar mentor – sorry, it had to be done! Stella Adler mentored both Robert De Niro and Marlon Brando at her conservatory, teaching them the Stanislavski Method of Acting. Used by both and allowing De Niro to rapidly start his career, she must have been an incredible mentor given their successes!

8. Socrates mentoring Plato – Plato mentoring Aristotle
This trio alone can show us the power of mentoring relationships, and that they date as far back as 400 BC, as well as showing how the student can become the master. Unfortunately, PushFar’s mentoring technology wasn’t there to support them but they seem to have done alright without it!

9. Gopal Krishna Gokale mentoring Mahatma Gandhi
Gandhi received mentoring on issues such as knowledge, understanding of Indian and the issues facing common Indians. That’s right, even the great Gandhi had a mentor but if you look below, he also (somewhat virtually) mentored another iconic leader!

10. Mahatma Gandhi mentoring Nelson Mandela
Although they never met, Mandela was greatly influenced by the books and writings of Gandhi.

11. Michelle Robinson mentoring Barack Obama
Michelle Robinson (better known now as Michelle Obama), was designated as Barack’s mentor at the law firm which they both worked at while he was a summer associate. Barack often credits Michelle today as being the support and success behind his great achievements.

12. Audrey Hepburn mentoring Elizabeth Taylor
Hepburn mentored Taylor throughout her career, and they remained friends up until Hepburn’s passing in 1993.

13. Professor Dumbledore mentoring Harry Potter
Although completely fictional, we couldn’t not add it in! The relationship between the two of them is strong. There is respect for Dumbledore, which is shared amongst all students, all understanding how much there is to learn. Harry’s development can be attributed to Dumbledore, far more than magic. Ta da!

15. Sir Freddie Laker mentoring Richard Branson
Branson once said, ‘If you ask any successful business person, they will always have had a great mentor at some point along the road.’ – And he was right! Branson went to Laker during his struggles to get Virgin Atlantic up and running. ‘It’s always good to have a helping hand at the start. I wouldn’t have got anywhere in the airline industry without the mentorship of Sir Freddie Laker.’

So, there you have it. 15 famous mentor and mentee relationships from celebrities, world leaders and iconic inspirations. Remember, having a mentor can benefit you in all sorts of ways! If you’re looking to give back and mentor someone, or would like a mentor yourself, make sure to join PushFar’s mentoring platform. It’s entirely FREE and we’ve thousands of professionals matching, mentoring and developing their careers.