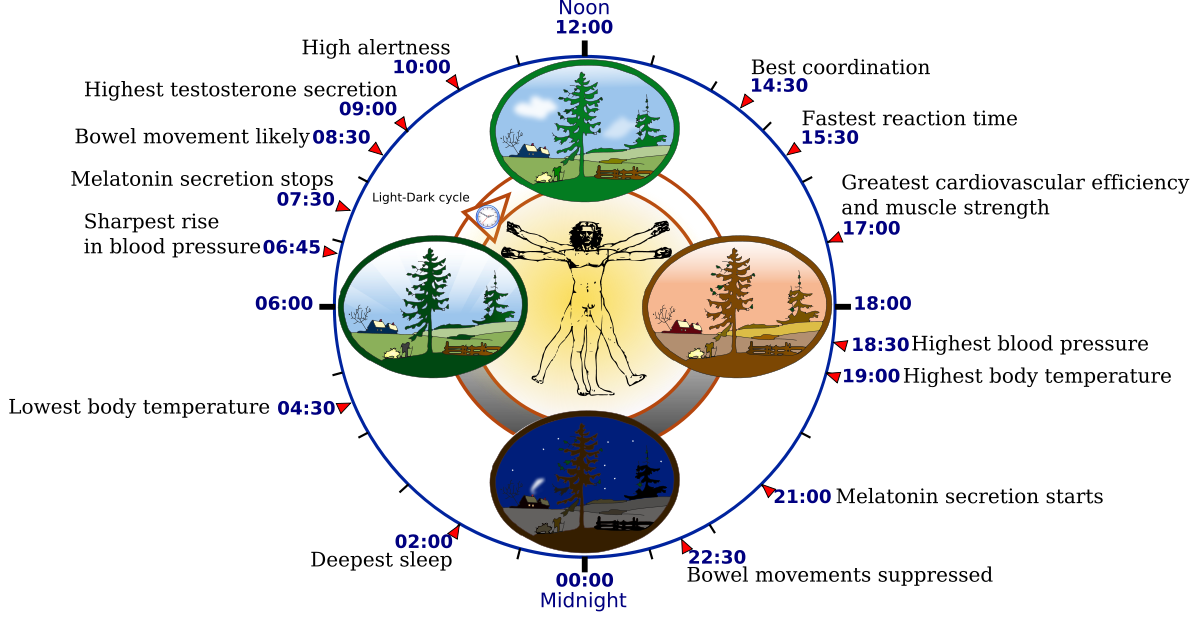 Our Body-Energy Clock ebbs and flows with energy during a 24-hour day. Every hour of the day our body supplies fluids, nutrients, proteins and removes toxins; this process is referred to as Circadian Rhythm.
Research supported by the National Institutes of Health has shown that the body’s Circadian Rhythm can influence sleep-wake cycles, hunger, cell regeneration, hormone release, body temperature and important bodily functions. Studies show that disruptions to your Body’s Energy clock can effect your sleeping patterns, hormone balance and could be linked to a host of health issues such as heart problems, obesity and depression.
Do you plan your daily activities around our Body-Energy Clock?  Think of lifestyle habits you might modify in order to better synchronize with your Body’s Energy Clock.
A good start is to eat heavier meals early in the day when the stomach is at its peak to catch your body’s warming energy. Eating larger meals of the day early delivers nourishment to the small intestine when it is strongest, which aids absorption and assimilation.
By contrast, have you ever eaten too much in the late evening, and awakened in the wee hours of the morning and were unable to fall back to sleep? Chances are good that you were tossing and turning between the hours of 1 a.m. and 3 a.m. when your over-loaded liver was struggling to do its work.
Before electricity and the light bulb, people ate supper and retired early, allowing time for the last meal of the day to digest so that the liver could be most effective in its peak hours of activity.
The work shift of the liver reinforces the concept of making the last meal of the day a light one that is consumed on the early side. The more time that passes after food is eaten before peak activity of the liver, the better the liver will be able to carry out its myriad functions
In the same way, it is taxing to the system to deal with late-night snacking. When we eat late at night, food is not well absorbed by the small intestine and the liver has little opportunity to do its job of housekeeping.  Between 1-3 a.m., the liver reaches its peak, doing its work to cleanse the blood, while the small intestine, the organ responsible for the absorption and assimilation of many key nutrients, is at its ebb.
When you eat with your natural Circadian Rhythm, you give your body the best chance to do its work well.  You feel better and release your natural energy.